Our club was founded over 38 years ago by Marshall Painter, Ron Baker, Kens Automotive and Rallye Auto Parts as the South Florida Volkswagen & Porsche Club. Each of them put up $250. The first Show ‘n Shine was held 2 yrs later at Mills Pond Park and after 2 yrs moved to CB Smith Park. After 2 yrs there the water slide was built and the club was kicked out moving backto Mills Pond Park. Because “Hot VW’s” would not print club info claiming that we were primarily a Porsche club, the latter was dropped from the logo. Several Porsche classes used to exist at the show. Hopefully some old memorabilia including the original banner will be found. Marshall Painter later went on to start Luftwagens. 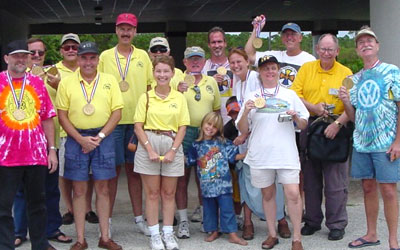